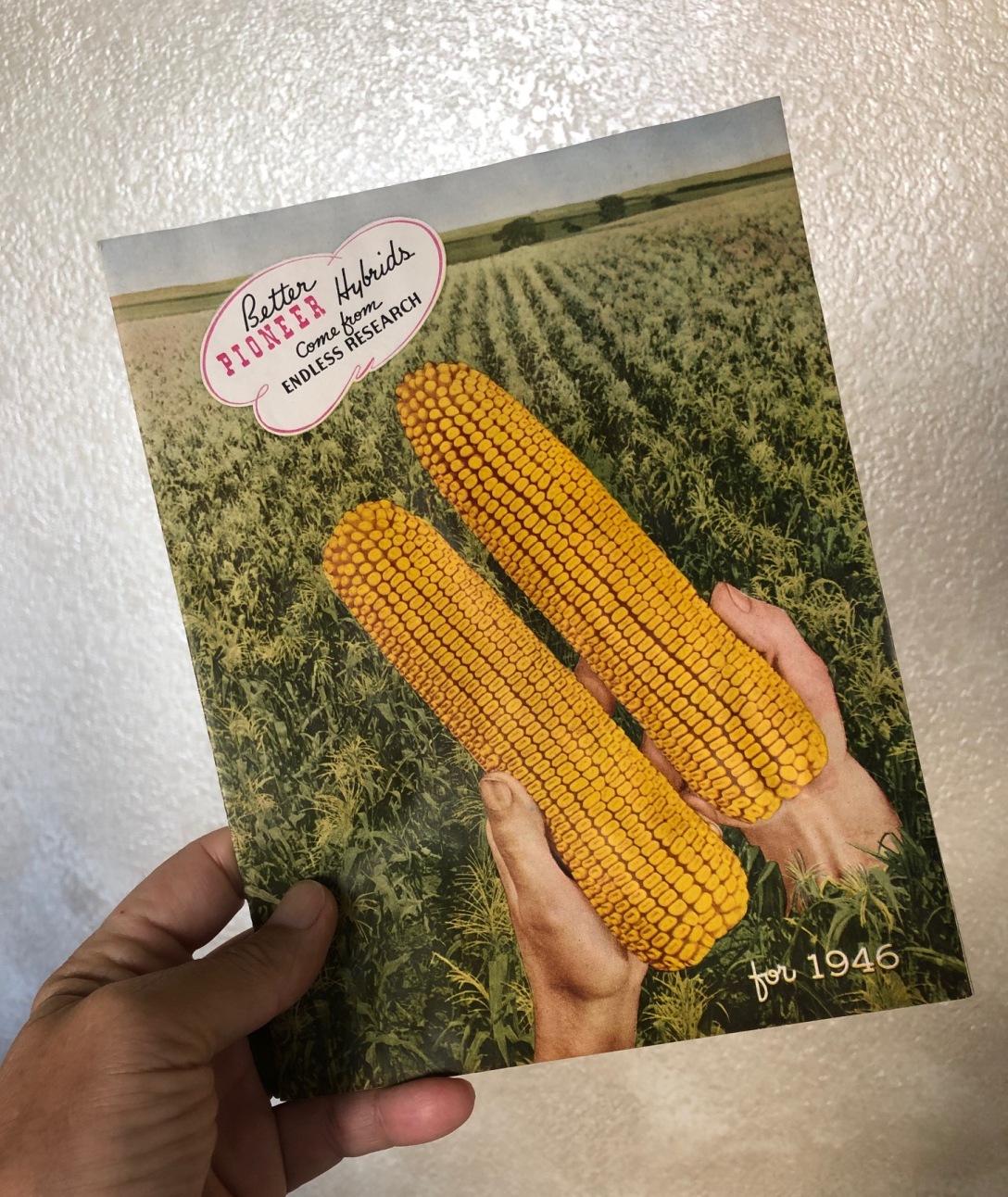 (I enjoy history, especially that of the seed industry. Every once in a while I will scan a catalog and offer up a .PDF version for your enjoyment.)

Stepping back in time, here’s the seed catalog for the year following the end of World War II.  You’ll find on page 2 (inside of the cover page), the mention of William Landgren.  I thought it was very kind and professional of Pioneer to include the name of a staff member who was still serving in the U.S. Armed Forces.  While folks at home were taking care of business, so too were William and thousands of others that served.  I’m proud that they chose to include him in the catalog.

When William returned to Pioneer, it was the beginning of a grand era of American agriculture.  New advancements in farm equipment, pesticides and other inputs were exciting as resources that were severely limited for wartime support were now made available for public consumption.  Rubber tires and steel are good examples of this.  The economy boomed as did seed sales to support the return to full time farming.

The seed catalogs from the 1940s and 50s (other companies included) are some of my favorites. Almost all included images of full-size ears so that customers could see the shape and quality of the seed. Throughout the 1940s, corn was still being husked by hand so farmers were still interested in ear shape and husk cover. Modern catalogs might include pictures of field scenes but rarely will they include images of ears. Lets be honest, seed companies today sell dozens of hybrids and there just isn’t room. We have to leave enough space for other stuff – replant policies, digital resources, sales program information, seed treatments, insect and herbicide traits, research advancements, etc. Also, we sell more than corn; there’s also sorghum, soybeans, wheat, sunflowers, canola, alfalfa and silage inoculants. Unless we want to return to the days of the Sears catalog, you can understand why catalogs have evolved into a series of tables and charts. Websites and social media platforms are where you find the images. (Are you familiar with @Pioneeragronomo on Twitter?)

Check out the characteristics table on pages 8 and 9. Most notable is the “EARS PER STALK” row in the bottom section of the table. Optimum populations for hybrid corn in the 1940s was between 15,000 to 19,000 plants per acre. For at least 75 years, hybrid corn has almost always produced just one ear on the stalk. Hybrids 322 and 355 sometimes put on two! Remember, also, that the common row spacing back then was 40 inches.

What’s refreshing throughout this catalog is the upfront honesty in describing the hybrids. For hybrid 373, “occasionally subject to stalk breaking in late fall… For hybrid 379, “occasionally root lodges.” A sales representative today practicing good seedsmanship will inform customers of potential weaknesses but almost no company will say it directly in print. (Rather, you can infer a product weakness by looking at the ratings.) Know this – many a customer will show loyalty to a brand and to their local sales rep that continues to support their well being by providing sound, honest knowledge of the products.

Another notable mention in this catalog is that of corn rootworms. In the lower left corner of page 6 that describes hybrid 353-A, there’s a picture of Karl Jarvis, pathologist, standing by a “valuable” plant that withstood severe corn rootworm conditions. I’ve never really thought about how long the Corn Belt region has had to battle this pest. Evidently, it’s been a very long time! It’s an interesting pest that now infests cropland across a large area of North America and more recently Europe.

Finally, folks are sometimes surprised at just how long replant policies have been provided by seed companies (see the back cover of the catalog). Frankly, they’ve been offered almost from the beginning of hybrid seed sales – either as part of a competitive strategy or out of kindness and understanding of how brutal Mother Nature can sometimes be. Over time, customers have come to appreciate this policy as replanting can be very expensive and stressful, to say the least.

Feel free to share this catalog with others and enjoy the history behind one of the oldest brands in American agriculture – Pioneer Hi-Bred.